The Basic Refrigeration Cycle explained below involves the following Components and respective functions: 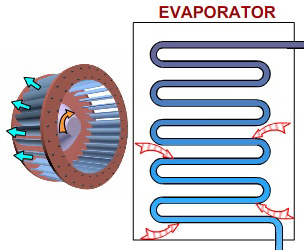 A Refrigeration system cools the surrounding by the evaporation of a medium called refrigerant. At a corresponding pressure the refrigerant evaporates at room temperature by absorbing heat from the surroundings thus cooling the same. In the Refrigeration cycle system the refrigerant evaporates in the component called evaporator to provide cooling. The cooled air can be blown by fans / blowers as in air conditioners.

2- The refrigerant that vaporizes has to be recovered for conversion to liquid phase for reuse. The 2 Refrigeration cycles as explained below primarily differ in this process of vapor recovery.

In this Refrigeration cycle system the refrigerant vapor from the evaporator is sucked in by a compressor which then compresses the vapor to a higher pressure. Hence the system is called a vapor compression cycle. The vapor is raised to a pressure such that its corresponding boiling (condensing) point temperature becomes higher than that of a cooling medium like water or air available at atmospheric temperature. The Refrigeration Cycle Animation in Video above describes this process.

In this cycle an absorber - Generator system replaces the compressor of the vapor compression cycle. An absorber with absorbent material is used to absorb the refrigerant vapor from the evaporator. The discharge action of the compressor is replaced by a generator. The generator, which is at higher pressure, receives energy from an external heat source to separate the refrigerant vapor from the absorbent. 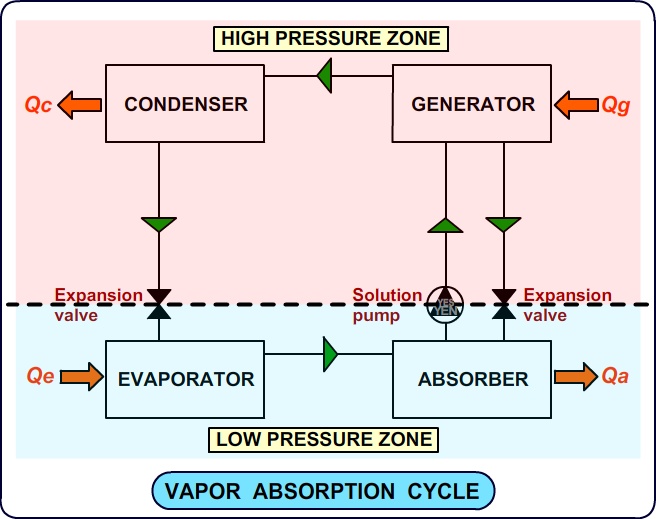 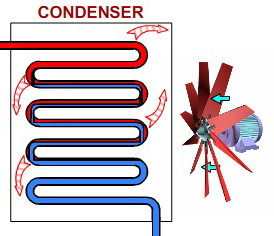 The above steps and processses describes the basic refrigeration cycle comprising of the evaporator, compressor, condenser and throttle (expansion) valve.

The refrigeration cycle video above explains the working principle of refrigeration and describes the various components and respective functions of a vapor compression cycle with step-by-step animated explanation.

For a Detailed Training on Refrigeration & Air
Conditioning
with Extensive Animations and Graphics, that describes the

Click on the above links for respective Equipment Maintenance Training related videos / tutorial.